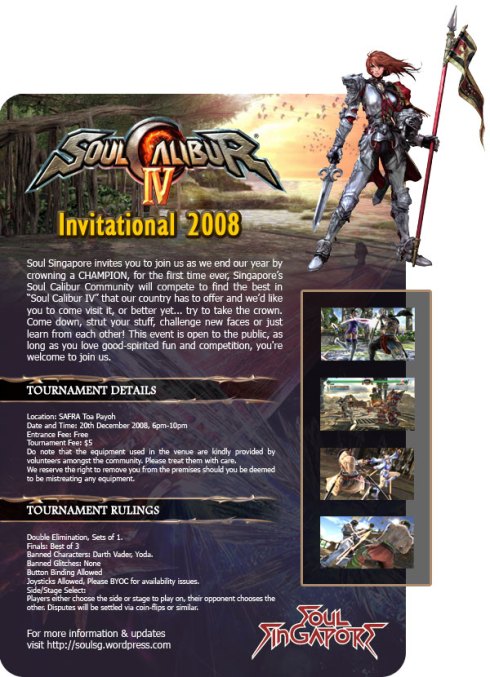 Its official, on the 20th of December 2008, Soul Singapore will gather at SAFRA Toa Payoh to compete and crown a champion to bring us into the new year. Being our first Soul Calibur IV Event, we’re hoping for it to be bigger and better than any other tournament we’ve held before.

Please note that all timings are subject to change.

1.  All equipment is volunteered from members of the local gaming community, any mishandling of equipment will NOT be tolerated. We reserve the rights to remove anyone from the premises should they be deemed to be deliberately damaging equipment.

2. Food & Drinks ARE Allowed, but please refrain from bringing in wet foodstuffs (Foods which may drip/spill) as we are responsible for cleaning up the place once we are done. Any mishaps would lead to quite a few people going home late. So please be considerate.

3. During Casuals, please do not hog. Try to limit yourself to a maximum of 3 (or so) games on the machine and then let someone else play.

4. The Tournament will have umpires overseeing match-ups. To ensure smooth procedures, kindly wait for instructions from the umpire before proceeding to do anything prior to a match (when to select characters, which stage to select etc.etc.etc.)

Banned Stages: 3rd Star Wars Stage (The one that comes with your “Other” Star Wars character)

Finals Side/Stage Select: Both Given to Winners Bracket Champion.

What is “Advantage Decision”?

A lot of players find it easier to play on one side of the game (1P side or 2P side) as compared to the other, other players use characters that can take better advantage of a particular stage due to its size, walls, or ring out options. As such, if left to luck, the decisions on which side and stage to play on could end up giving one player too much of an advantage. Thus, before every round we will hold an “Advantage Decision”. “Advantage Decision” consists of a simple game of luck, like a coin flip or scissors-paper-stone. Both players will engage in this game and the winner will get to choose his advantage, Side or Stage. If he chooses Side, his opponent chooses the stage for their match and vice versa.

What if I have “Stage Advantage” and wish to choose a random stage?

If both of you are playing on a console WITHOUT the 3rd Star Wars stage, feel free to select random stage. However, if the machine you are playing on has got the 3rd Star Wars stage, you will be provided a d20 dice to toss. The number indicated on the dice will correspond with a pre-prepared stage chart, and you can “manually” select your “Random” stage.

If time and resources allow, we will rearrange your brackets. Otherwise, both of you will be forced to use the next available console, even if it means one of you has to use a controller you are not familiar with. Do note that usually tournaments run on a single platform, meaning a fair number of players have no choice to adapt to a different controller to begin with. This event is run on both platform due to lack of resources.

I want to join the tournament but I cannot make it until 6:30pm… Can I still join?

You can contact us and inform us what time you’re coming. We’ll try our best to drag your matches until as late as possible. In the event that you still don’t make it to the tournament on time. You will be disqualified but won’t be charged your entry fee.

This is an event run by the community for the community, as it is, the $5 tournament fee is to help cover the costs of renting the room and transporting the equipment and it is barely enough. Still, we hope that everyone can come together to enjoy the game and we apologize for being unable to provide any form of recognition or reward for the winner.

Why the name “Advantage Decision”?

(Lol fun question.) I wanted something catchier to say as compared to “Player chooses either side/stage, opponent chooses the other and vice versa” which is long, boring and a chore to say/type. Having a term to represent the whole process would have been much nicer. I happen to find “Advantage Decision” has a nice ring to it.. considering the winning player decides which Advantage he gets.

Why are the rulings for the Finals different?

They are the FINALS! They deserve a little more attention and drama to them. Also, as a reward for not losing a single match prior to the finals, the champion gets to choose which side he plays on automatically, as well as the first stage to play on. Consecutively, the stage will be chosen by the loser of the previous round.

Is there anything I should bring?

Bloodlust! A thirst for victory! No seriously, just come with yourself ready to meet some nice people and have some fun. For tournament participants, please prepare the following details for registration.

Reason for email is so that we can send you the results along with links to videos and pictures. As for age, that’s a piece of information we might need for getting the next event going. 🙂

What is Soul Calibur IV?

Soulcalibur IV is the 5th and latest installment in Namco Bandai’s Soul series of fighting games, released on PlayStation 3 and Xbox 360 on the 31st of July 2008, this weapons-based fighter is one of the most popular 3D fighting games in the world today. With the new online play, soul gauge system and customization features, as well as the entrance of guest characters from the Star Wars universe. Soul Calibur IV is set to be the best installment of the series yet.

What is Soul Singapore?

Soul Singapore is a group of Singaporeans who have been enjoying the game for close to a decade, the name “Soul Singapore” sprouted out back in 2003 when they decided to start holding team tournaments to promote deeper sense of teamwork and competition amongst the fans of the game. What started out as just a cool name to refer to ourselves as (as opposed to “the community”) became more of an identity with the advent of internet phenomenons like “Youtube”, “Friendster” and “Facebook”. Over the years, Soul Singapore has seen about 40-50 people joining us to enjoy the “Soul Series”, games, and everything wonderful that life has to offer. We hope that you can join us too.

That is ALL folks. Thank you for reading and we hope to see you there!

I am too cheap to pay for Wordpress upgrades. END_OF_DOCUMENT_TOKEN_TO_BE_REPLACED
This entry was posted on Wednesday, November 26th, 2008 at 9:51 pm and tagged with Casuals, Consoles, Playstation3, PS3, SAFRA Toa Payoh, Soul Calibur IV, Soul Singapore, Soul Singapore Invitational, Tournament, Xbox360 and posted in Community, Tournaments. You can follow any responses to this entry through the RSS 2.0 feed.
« Finalised logistics!
Sith Combo Project: Dark Powers of the Sith »